All zeroes are not equal.

UFC middleweight champion Israel Adesanya entered Saturday night’s title fight with a 19-0 record. His challenger, Paulo Costa, came in at 13-0. And when the UFC 253 main event began and it was time for these two men to put their unbeaten records on the line, Adesanya completely outclassed Costa.

And he did so in style, picking the burly Brazilian apart from the start with kicks to the lead leg, the torso and the head. He slowed Costa, bloodied him, then finished him with a second-round flurry at 3:59 of Round 2. Adesanya showed off everything he had.

The champ and his challenger did not have nice things to say about each other in the lead-up to this fight in the UFC’s return to Abu Dhabi, United Arab Emirates. But now that their scuffle is over, Adesanya should probably express a little gratitude to Costa for bringing him a generous gift.

The challenger stood right in front of him in the center of the Octagon, and fought.

Costa never got to unleash his trademark forward-moving fury, which had brought him finishes in all but one of his previous fights. But he stalked the champ early, absorbing calf kick after calf kick to close distance. Costa never quite succeeded against Adesanya, because he was simply too elusive and too precise with his counter-punches and other strikes. Costa tried to draw the champ forward, taunting him, sticking out his tongue, even putting his hands behind his back. But Adesanya was not only too skilled for Costa, he was too smart for him, too. He would not be baited into a brawl.

Adesanya fought a perfect fight, really, and it couldn’t have come at a better time. 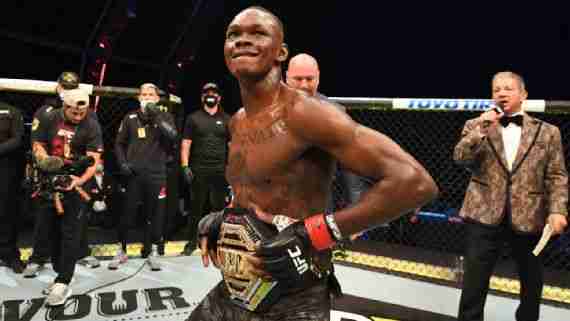 Israel Adesanya sent a clear reminder of why he’s the undefeated, undisputed UFC middleweight champion on Saturday against Paulo Costa.

The champ was aching to let flow the artistry that had made him a must-see attraction as he worked his way up the 185-pound hierarchy and took over the division. On the night last October when he knocked out Robert Whittaker to become champion, “The Last Stylebender” was pure entertainment — even before the title fight in his walkout to the cage, during which he treated a UFC-record crowd of 57,127 in Melbourne, Australia, to a choreographed dance routine.

The sparkle from that night’s performance fizzled out five months later, though, in Adesanya’s first title defense. His challenger, Yoel Romero, had previously embodied all-out hostility in his fights, but against Adesanya in March he took barely a step forward. That left the champ to lead the dance. But Adesanya is at his best as a counter-puncher, and for five dull rounds he, too, seemed to be standing in cement. It was a dud of a fight for spectators and a missed opportunity for the champion to build upon his star power.

“I feel like that was a valley in my story,” Adesanya told reporters this past week. “That was my valley, and now it’s time to rise again. … This is the time that’s going to shoot me into the next stratosphere.”

And on Saturday night, after he had put on an out-of-this-world performance, he said, “Like Roy Jones said, I say, ‘Y’all must have forgot,’ ’cause of what happened last time.”

By fending off the Costa challenge, Adesanya now has consecutive successful title defenses — as many as any male fighter now wearing a UFC belt. And the 31-year-old Nigeria-born New Zealander has set himself apart as the most spectacular star among those champs.

Consider the other men who own UFC gold: Stipe Miocic, Jan Blachowicz, Kamaru Usman, Khabib Nurmagomedov, Alexander Volkanovski, Petr Yan and Deiveson Figueiredo. Stellar fighters all, but other than the smothering smashmouth offense of Nurmagomedov, there’s not a lot of style points at the top of the men’s game.

After setting Costa up with kicks throughout the first round, Adesanya unleashed a flurry of strikes in the second that ended the fight

The most entertaining display we get from a current UFC champion — other than Adesanya — is the whirling dance routine that Valentina Shevchenko pulls off after each inevitable defense of her flyweight crown. Her fighting has a high-kicking grace as well. The other female belt holders, Amanda Nunes and Zhang Weili, are much like most of their male counterparts: They fight with the fury of champions, leaving the talking — and twirling — to others.

Adesanya showed off on Saturday the same stylish flair we had started to get used to prior to the Romero mess. That should broaden his already growing appeal among fans. None were in the building for UFC 253 because of the coronavirus pandemic, but in normal times a packed arena will let it be known — loudly — what’s most important to the paying customers. The volume inside the building typically gets turned up a few decibels when a fighter like Adesanya is performing. Perhaps by the next time he defends his belt, we’ll get to experience that noise again.

However, as much as fan appeal matters to a fighter’s bank account, there’s nothing as important as winning. That’s what it takes to put a fighter in a high-profile position where the style points matter. And Adesanya ensured himself a spotlight moving forward by showing off the smarts and the poise that it takes to fend off an undefeated challenger who is relentlessly closing in.

Adesanya was laser focused in Round 1, seeing everything that Costa threw his way and dodging most of it. And the champ was patient as he picked apart the challenger, who couldn’t get to Adesanya and couldn’t get out of the way of what was being fired back. Costa showed a brave face throughout the first round, attempting to dismiss the potency of Adesanya’s kicks, but as the second round wore on, you could practically see his confidence draining.

Adesanya was in control of every inch of the Octagon and every second of the fight. That mastery could add up to a long reign for him at the top of Mount Middleweight.

And Saturday’s stylishly dominant victory was a big step forward in making fans want to watch this champion’s future unfold.